- 4:04 pm
On Tuesday 25 June 2019 I caught up with the Dominion field trip to the Henry Moore Institute and Leeds Art Gallery. Dominion is a group of refugees and migrants largely from Africa, the Middle East and south Asia based in Wakefield. They've been working with Rachel Craddock, Communities Manager at Hepworth Wakefield, and engagement artist Emii Alrai. Emii told me about the clay workshops they've been doing at the Hepworth centring on identity and migration. The exhibition of their work will be unveiled on 2 July if you can make it. Unfortunately my days in Wakefield are finished and on my tight budget I don't think I'll manage to return any time soon. I've rather fallen in love with Wakey. A regret of this residency is that I had such a short amount of time with this group, but I feel privileged to have met them at all, the reasons for which I hope will become clear in the following summary.

After some housekeeping and information from Angie, Rachel's equivalent at LAG, we split into two groups. Jen Boyd came to witness how I was working to help her have an idea of how to proceed with her response to my response to people's responses to the engagement programme. We joined Rachel for a quick look through the YSI exhibitions at HMI. Rachel had prepared three prompts to encourage the participants to get talking and engaging with the work:

In each gallery, talk to your neighbour.
Complete the sentences below. 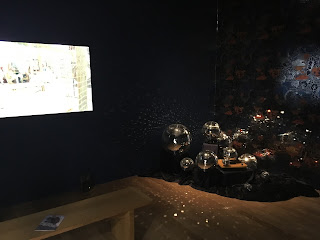 We first went to Cauleen Smith's installation. It was a small, dark, closed room with shiny wallpaper, disco balls and a video playing on loop. From the film - entitled Sojourner (2018) - members of the group pointed out its emphasis on identity. Many were from West African countries such as The Gambia, and particularly the women highlighted the focus on women and their clothing in the film, pointing out that many of the bright-coloured fabrics and designs were similar to what they would make and wear there. We talked about the African-American identity and that the mixture of styles in dress and hair could possibly relate to trying to connect to a lost heritage that is broadly African, given that many African-Americans do not know from where more specifically their ancestors were taken. Members of the group observed how political the presence of the group of women in the film is, the way they strut, take up space, and walk almost in a collective march in unison but also spread out and expressing their individuality. 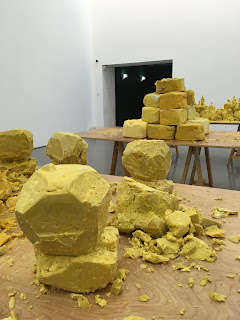 There was audible excitement as we moved into Rashid Johnson's room and encountered Shea Butter Three Ways (2019). A woman in the group explained that in this form, shea butter is used as moisturiser, a baby rub and for pain relief. We discussed the first table and how the stacks resembled busts, explaining the distinction from the kind referring to the chest region of the body. English is a funny old language. The group then noted how the blocks on the second table were stacked like the building blocks of a pyramid. The third table was where the fun really happened. We've had play-with-clay before and this became play-with-shea (although our African friends were pronouncing it as 'shia' and I'll defer to their better knowledge from now on). Hilarity ensued as we became a sticky mess and added to the public sculptures in progress. As we dug into the butter its natural white colour was revealed underneath. The person who had informed us of its uses where she comes from said that the white or paler yellow was its actual colour. A few people then figured perhaps the artist had dyed the surface to make it look like dairy butter (which as far as I know is also often dyed yellow to make it look more appetising). As we prepared to return to LAG for tea and cake, the invigilators kindly provided wet-wipes and kitchen roll to help us get cleaned up, during which time quite a few of us took the opportunity to moisturise! Upon our return to LAG, our informative friend showed us this video of shea butter processing:

After beverages, cake and chatter, I joined Emii and Angie for a quick look around LAG, beginning in the Ziff Gallery in which Damien Hirst's Black Sheep with Golden Horns (2009) is put in dialogue with a room of paintings featuring animals and themes of religion and sacrifice. Angie told the group the room first opened in 1888 [one hundred years since Hirst first emerged as a public figure in British art], and that it is a room of stories while drawing attention to the huge skylight illuminating the images [and reflecting off the highly polished glass tank]. The group were inquisitive and seemed to enjoy the paintings. One features steep hills in Norway, which Emii said she loves because it reminds her of Scotland. Even in simple observations, people were thinking of a sense of home and homeland. 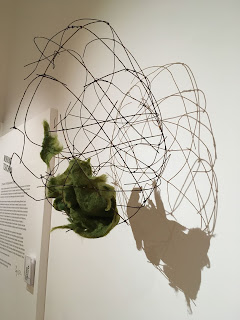 We moved on to the White Gallery and Nobuko Tsuchiya's work created onsite using the space as a studio in the weeks leading up to the festival's opening. There is something precarious and otherworldly-yet-of-this-world about the objects in the room that make me think of a future history of organic matter fusing increasingly with machinery and aftermaths of technological wars. It took people in the group a while to warm to this room. Some very quickly wanted to move on while others were curious and needed to explore further. Angie said that the idea was 30 ways to get to the moon, and that it looks like experiments that have largely failed. Of the two large blobs in the room, one is representative of landscape while the other is akin to flesh or the body. Some works look like flesh has melted into materials that were once part of a machine.

Time was pressing on so we whizzed through Rachel Harrison's and Joanna Piotrowska's rooms, past some of the permanent exhibits - including a bit of learning to dance at Georgina Starr's Static Steps (1992) - to all meet up for a group photo under Ayşe Erkmen's three of four (2019). And as suddenly as they'd arrived, they had gone. It was a bit of a whirlwind and very fun. Emii keenly invited me to the grand opening of the group's work a week lat 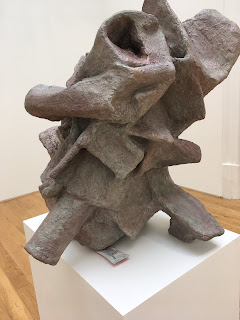 er, but I'm already scheduled to go to Abbey Grange school for their sculpture install, which will be the feature of my next post.

Alone in LAG, I wrote some notes and waited for Jen to return for another chat about where we're going with our written pieces. For me it is now dependent on what kind of platform is realistic within the web designers' budget as my thoughts are becoming ambitious. Jen is considering key words from my journeys and experiences as prompts for her own.

Something I forgot to put in my write-up of day 6 was that after making the sculptures one of the teachers heard her pupils say 'I'm proud of myself'. Quite right too, and I hope I can say the same when I construct mine.