- 10:02 am
On Monday 24 June 2019 I met up with Amanda Phillips from Leeds Art Gallery's education office. Amanda has been working on various engagement activities with Blackgates Primary Academy for some time, and these include the YSI programme involving artist Emily Binks who I have unfortunately not met on my travels. Amanda teamed up with YSP's Formal Learning Coordinator, Kathryn Brame, and artist Gary (I did not learn Gary's full name) to deliver workshops with (I think) Year 1 pupils. The larger group of small humans was split in two. For the morning session I went with Gary - the prospect of getting stuck into making things was too enticing to turn down. 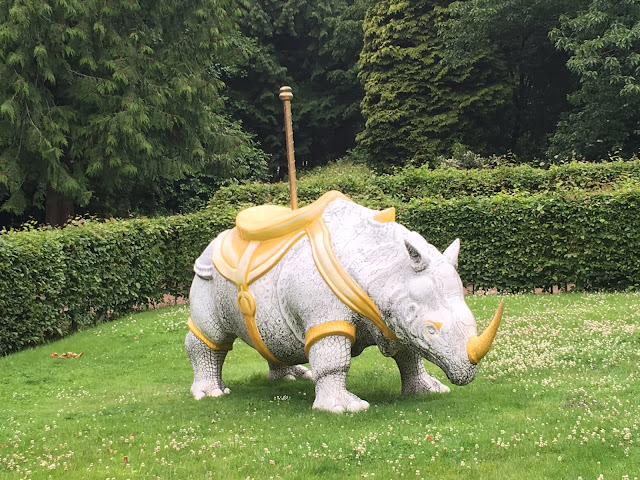 The first stop on our travels was However Incongruous (2011) by the Raqs Media Collective situated by YSP's learning block. Gary asked the children to describe it. They noticed that it looked like a figure from a carousel, pointing out the horns, the pole, the golden colour and the saddle.
- I want to ride it!
- It's scary!
Gary asked them if they thought it looked like a real rhino and whether they thought its proportions were right. They weren't sure that they were. He told them the story of Albrecht Dürer's sixteenth-century woodcutting of a rhinoceros based only on people's descriptions of an Indian rhino brought to Lisbon, which marked the first time such a creature had been seen in Europe for a thousand years. Here re-imagined as a carousel ride, the markings on the sculpture's body match those on Dürer's impression. 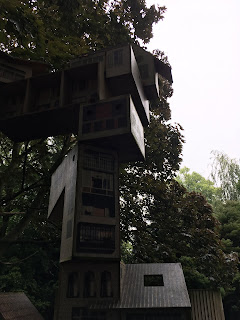 We next visited the bird houses and began thinking about what sculptures could be and be made from. This piece, intended as a home for birds, was the product of a community project which got teenagers to photograph and create collages of features that would make their dream homes. With the advantage of being small, the children noticed details that we tall people couldn't access such as the birds on the visible undersides of the blocks. They also noticed that the 'brickwork' was constructed with words, and were very excited when Gary pointed out that right at the top was a rooftop swimming pool often used as a bird bath. He noted that because of the traffic of people, no creatures tended to use this house as intended. However, the less accessible-to-humans boxes and houses in the wood nearby had far bolder inhabitants - the holes had been chewed larger by their grey squirrel occupants.

We looked at and felt the textures of a mother and child stone carving by Zimbabwean artist Colleen Madamombe which she had completed on site. Gary explained that she would think about what was inside the lump of stone and chisel away to release it. The children pointed out the bumpiness of the hair - the impression of cornrows and dreadlocks - while the skin was smooth and the cheeks chubby. Gary told us about a visually impaired visitor once feeling it and noting it was a sculpture about love, recognising that it was a mother holding her baby.

The children noticed another stone carving:
- What's in there?
- Did she make that sculpture over there?
- Where's his head?
- It's bigfoot.
- It's got big hands.
- He doesn't have a nose.
- It's got cobwebs here. (Spider-spotting was a recurring theme with this group!)
Gary said he normally tried to get people to make themselves into this contorted sculpture, but it was too wet that day.
- It's like limbo! (The face looking up to the sky.)

To the tent!
- It smells nice in here.
Gary says it's time to listen and explains that we'll try to make things outside in groups. To much excitement he asked the children what they think a sculpture is. Their teachers explain that they've had a sculpture installed at the school, so they should be able to answer.
- A big model made out of stone or metal.
- Clay, all kinds of stuff.
- It might have steel in it.
The teachers said that it was Barry Flanagan's The Cricketer (1981) that had visited the school for a day some weeks back, and Gary said Flanagan's hares had been at YSP for a while some time ago.

Gary set the task of making something tall, something you can look through, something that was together and - a suggestion from the children - something funny using the range of materials available in the outdoor maker space. One was a bird with a nest of eggs behind green leaves, another was a rollercoaster and fairground, and the third began as a volcano and ended up as living sculpture with a rocket and rainbow. 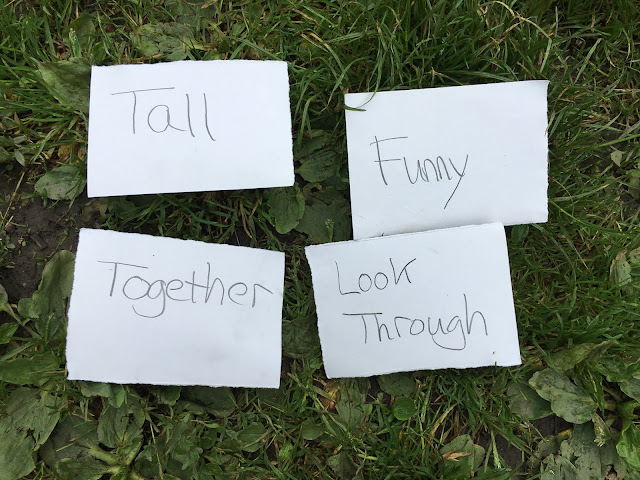 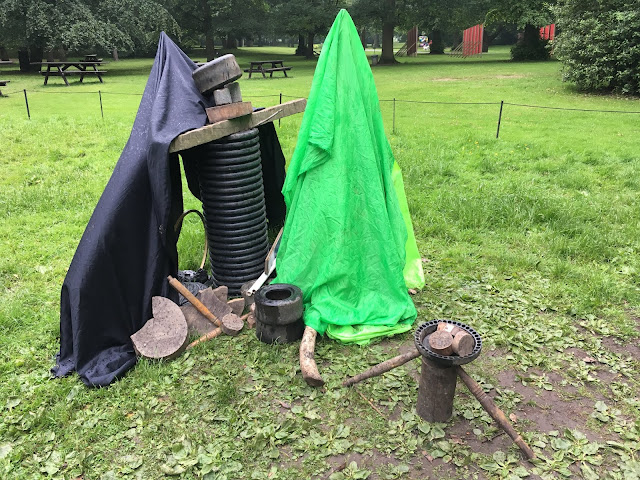 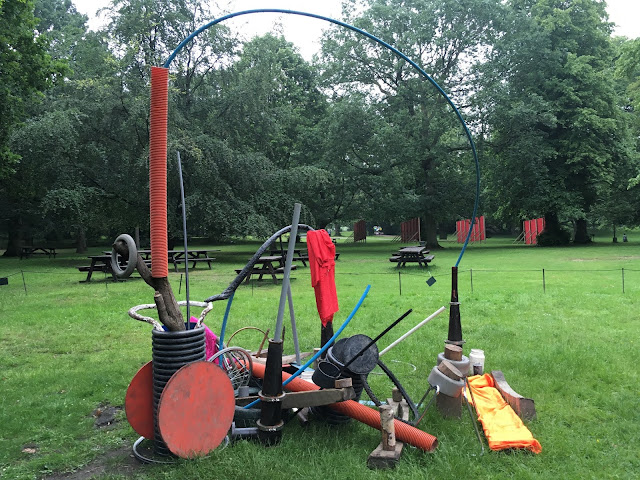 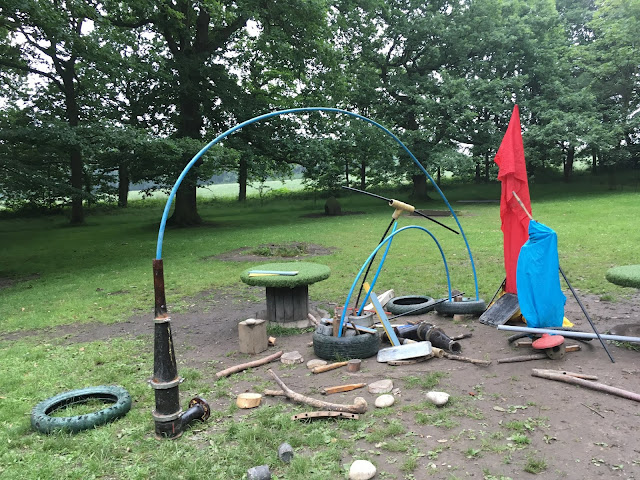 After lunch I went with the same group on Amanda's trail. Before setting off, she tried to open the children's minds as to what sculpture could be. She warned that we'd be encountering sheep on the fields - were their leavings accidental sculptures? She described moving out to large spaces in which we could listen to sculpture, that there was a room with a floor of mirrors, that sculpture was art we could see all the way around, that we'd be walking a lot but also talking and drawing. 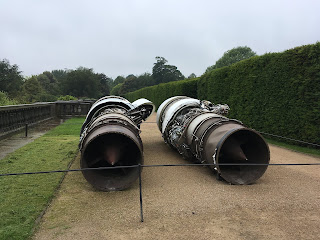 Our first stop was David Nash's Barnsley Lump (1981), a slowly weathering and eroding cube of coal that begs the 'what is art?' question. This arose again with the materiality of Roger Hiorns's Untitled (2010), the two engines from a decommissioned surveillance aircraft. In this the children recognised metals, plastics, and fabrics. Getting them to walk around these large structures, Amanda encouraged them to consider three-dimensionality and pointed out their use of language to describe the objects: rocket, thrusters, car, ship, aeroplane. Referring back to one of their earlier workshops, Amanda asked them to think about art that comes from readymade objects as these were from an existing machine. She suggested that art happens when artists change the materials.

We next saw sculptures made with words. Fittingly close to the engines is Hilary Jack's No Borders (2018) which quotes aviator Amelia Earhart. After some clambering around its lower scaffolding, we walked on to Jem Finer's Longplayer (1999), a 1000-year-long composition intended to play from the trees until the last day of 2999. We considered how this changed the space. The children worked through how the sound might be transmitted and the different responses each of them had to it:
- Maybe it connects to a studio.
- Maybe the artist is doing it.
- It's weird.
- I'm feeling scared.
- Spooky.
- It's making me sleepy.
- It's like music.
- It makes me terrified. 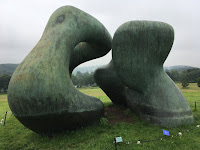 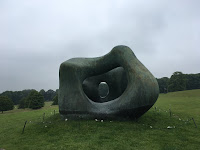 Over Brian Fell's Ha-Ha Bridge we go and traverse sheep-filled fields - This is a poo studio! - to visit Henry Moore's Large Two Forms (1966-9). The task Amanda set here was thinking and describing through drawing. The children first practised with their 'thinking pencils', that is, their forefingers, before getting stuck in with paper and pencils. When the drawing was well underway, Amanda asked them to come up with three describing words. Still fresh from Gary's session, they replied: see-through, gaps/holes, tall, hard, funny, huge. Amanda then suggested moving around and changing views.

It was at this point that I had to leave to catch the bus back to Wakefield to meet Jen Boyd, the established writer commissioned by Corridor8 to write something in parallel or response to my piece. We're still working through what both of these will be and I think we made a lot of progress on that in our conversations, so watch this space for further developments!