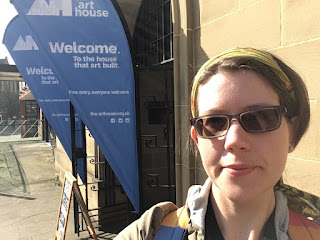 I was in Wakefield again on Thursday 16 May and had the pleasure of meeting more of the YSI gang at their office in the Art House – what a cool gallery. After meeting with engagement curator, Meghan, and two students from Leeds City College on placement, we all walked to St Michael's church in Westgate to join Rachael Kidd’s play-with-clay session.

Rachael has been working with people seeking asylum who are staying at Urban House, getting them involved in self-expression. Rachael’s initial idea was to lead workshops using gardening and the land as sculptural processes and materials, but the activity space at Urban House had to be given over to accommodation. St Michael’s hosts many kinds of support and learning opportunities for asylum seekers and refugees, and stepped in to offer its hall for Rachael’s sessions. Due to language barriers and the change of plan, Rachael responded to Phyllida Barlow's provocation that no one has a lump of clay to work with by giving people a lump of clay to work with.

During this visit, I was reading Seventeen by Hideo Yokoyama, a novel based around a real aeroplane crash in the Gunma Prefecture, Japan, in 1985. It follows a newspaper reporter put in charge of the local paper's coverage. 520 people were killed and four survived. I was thinking a lot about it during those first three residency days and ways that it relates to what I've dealt with before regarding others' traumas and carrying their stories – we are vessels too, thinking back to day 2 – and treating them with respect and dignity while getting to the heart of the matter. It felt appropriate to bear these issues in mind when working with people seeking asylum.

Building on the previous day’s encounters with the John Jamieson crew, I was thinking about the healing potential of working with materials and the tactility of clay. We don't know what people staying at Urban House have been through, and the point is to provide a safe, fun, stimulating space in which the joyful things in life can be experienced to get a break from the bad. We learn increasingly from studies that access to and engagement with the arts promotes well-being and is great for mental health. Making this sort of activity available is the least we can do.

Residents at Urban House usually stay for around 30 days before being placed elsewhere in the north of England, meaning that attendance at the sessions has been unpredictable. Ramadan had just begun at the time of my visit, which affected attendance too. But over the weeks all types of sculptural work accumulated: 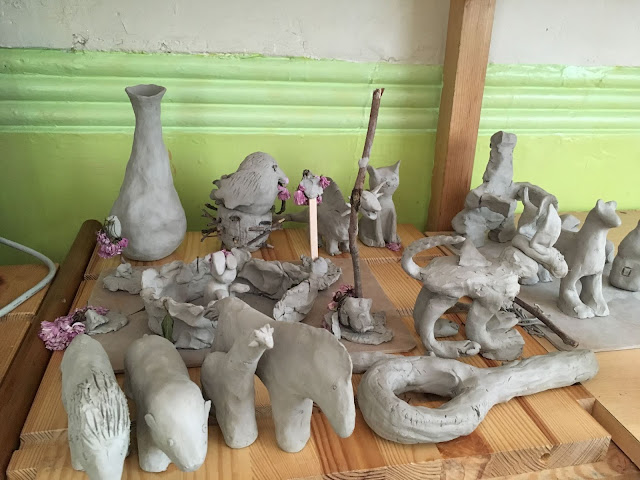 Rachael and Meghan explained that the first week's session was attended mostly by young men from west Africa who made animals familiar to them – shown at the front of the above image with the dried works. Evidently, if you let people of any age loose with materials, through their creative instincts they will find ways of communicating that transcend words.

As the photos show, Rachael has still been incorporating natural materials gleaned from the church grounds; when we arrived, she was gathering tree debris, much of which we used in our play. There wasn't much clay left, so making use of twigs helped us eke out what there was and encouraged us to think small while Meghan heroically retrieved more from the office on foot – it’s heavy stuff. I initially tried different ways of rolling small lumps between my hands to make mini monuments, to what I do not know. One looks a bit like a macaroon. I like the cracks. (Rachael also admired its cracks.) If I ever retrieve them perhaps I'll paint them. It was air-drying clay, and Rachael said she would bring the sculptures to the opening weekend street party event. 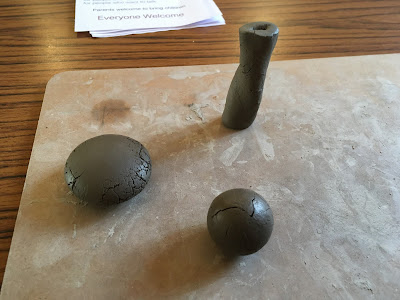 A woman and her two young children were well underway with their clay-play when we arrived. Not only were they making figures, they were in the process of making the picture of a house, shining sun and a tree. How many of us have drawn or painted such a picture as a child? Rachael told me that during a previous week, a boy had painstakingly built from clay – using nearly a whole bag – a huge house with lots of detail. He made an accompanying swimming pool for it, and when she went to the kitchen for a moment, returned to find he had filled it with water. Well, the fall out seems to be best left to the imagination. 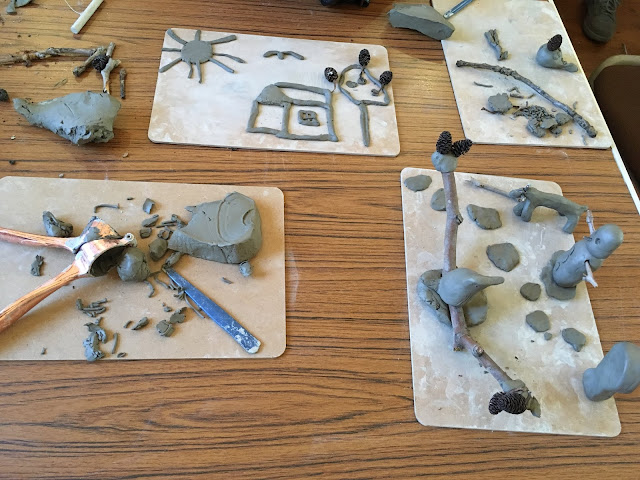 One of the college students made the most lovely scene of a bird perched on a branch. Rachael pointed out that lots of people have done similar, using the clay as a joiner for other materials. The other made a rabbit eating a carrot. There are quite a few 4-legged creatures on the go using different techniques. A garlic crusher was put to good use making clay spaghetti, and one of our little friends made the cutest, tiniest sculptures with the strings. 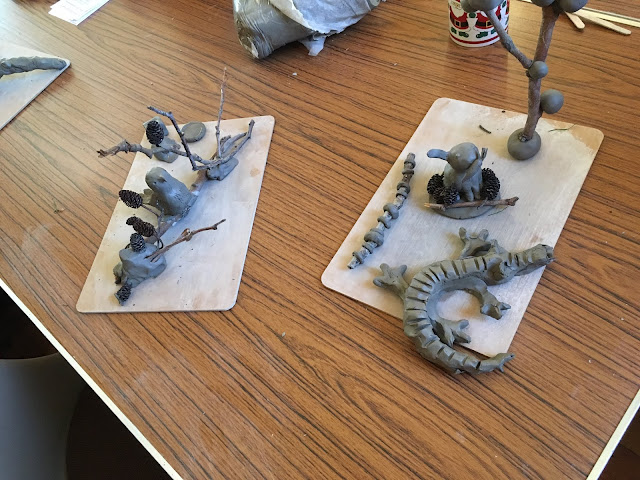 Domestic spaces, homes and animals are recurring themes in what participants have made. And then I come along and do abstract stuff. I don't know what that says, if anything. Perhaps I'm more settled. I have felt displacement, but not on the scale of these people. Perhaps I have less imagination, and without direction I make simple forms. Perhaps it was because I like the feel of rolling the clay, especially into round shapes, as that was how I began my vessel the day before: a roll and a poke. The tactility and rolling motion are calming.

Rachael is hoping to source a human-sized lump of local (if possible) clay that people can pull chunks from to make things with during the Wakefield street party; I hope to chat to her again there. I cannot wait for residency leg 2 and the opening weekend!