The close of Sunday 23 June marked the halfway point of my residency and the firming up of my ideas for the shape and content of my final written piece. I spent the afternoon moving between observing and participating in the street party at Coronation Gardens in Wakefield city centre which attracted a fantastic turnout. Fun and play abounded.

I made two brief audio recordings early on in the afternoon which can be found on my Soundcloud profile. There was such a lovely hubbub that that felt the best way to capture it. I hope you'll agree you can feel the warmth of the atmosphere coming through. They are unedited and you can just about hear my brain breaking a little, trying to keep up with all the input! There are also times when you'll hear me spontaneously laugh because a small child has done something hilarious and adorable nearby. 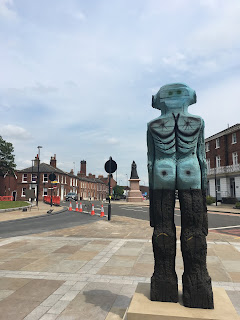 It was great to see Huma Bhabha's Receiver for real, and it really does from certain angles look like it's facing off with Queen Victoria. They make a triangle with the cenotaph as well, so there's a lot to say about colonialism, migration and conflict, including the legacies of the past and what's happening today. Receiver for me is a reminder that there is no real boundary or distinction of 'that was then and this is now'. Then is very much now.

On the question of identity that keeps cropping up, there was a moment when I was sitting writing notes near the YSI stall and members of the Wakefield Metropolitan Brass Band began to play. The two people on the desk laughed about how British this was and joked about the festival’s red/blue-with-white-text branding. Being the Northern Irish elephant in the room, I hadn't wanted to vocalise this observation, and felt relief at others’ recognition of how loaded those colours are. It's good to reflect that there are many narratives currently being bandied around about the greatness of Britishness and what that should mean, and that day what I witnessed was a pocket of what to me is truly great Britishness – the flavour of it that welcomes, embraces and empowers. Bhabha mentioned the day before that Receiver is also a transmitter. The festivities coincided with Refugee Week and many of the day’s guests and participants were displaced people. As well as them receiving, they gave their ideas and creativity - an important moment of cultural exchange rather than a narrative of assimilation and erasure. 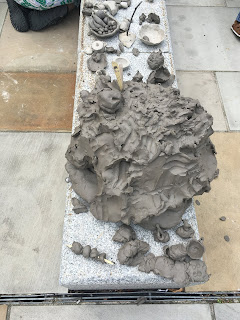 It was great to catch up with Rachael Kidd whom I met during day 3 of my residency last month. The dried clay figures were all collected on a granite bench and small people and their accompanying humans were happily adding more from the big lump of clay placed at the end. Unfortunately it was not the local stuff Rachael was hoping to source, but the making and getting the hands dirty and the fun of it all were what was important. There was another clay stall nearby using icing piping bags which looked like tremendous fun and was busy the whole afternoon.

There was a mask-making stall using cardboard and all kinds of drawing/colouring materials. The pitch sharing a tent with it was using cardboard bases too, many of them conical shapes that the weans were using as horns! They had all colours of ribbons, string, tape, stickers and I can't remember what else. These two hung on the longest – people were still hard at work while the rest of the marquees and tables were being brought down around them! 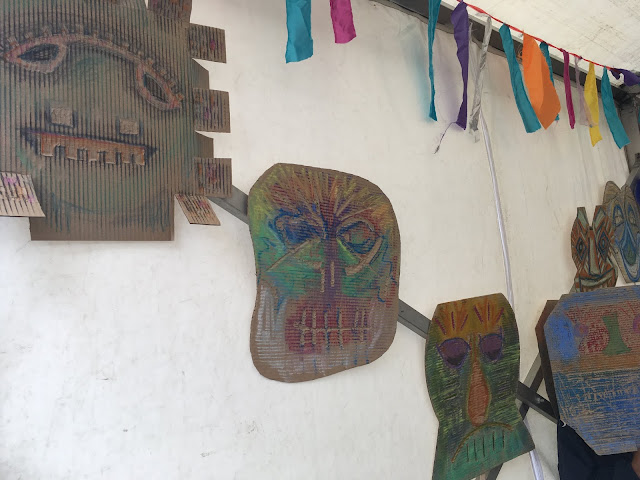 Index, the fringe festival, had a presence as well. I've jotted down some of the things they've got going on for when I might have free time. They're also across both cities, but it'll just be the Leeds things I'm likely to make it to when I return for leg 3. As well as having a print-making and information tent, they had a tiny workshop area fittingly on the fringe of the party which was a bit piggy-in-the-middle between Receiver and 'er Maj. They were making humanoid figures with tinfoil and they had a little booth in which small people could draw on acetates and other things.

The fun didn't stop there – we were very well fed too by a gluten-free Abyssinian restaurant called Corarima who more than ably catered the party. It was incredibly yummy, healthy and very generous. As a vegetarian it's a rare treat to walk up to a buffet and be able to eat most of the things! Inclusion was definitely key to the event. Everything was flat and disabled people seemed able to access everything, it was outdoors so just about anyone could join, there were people of all ages and there was no alcohol in sight. Perhaps the nicest thing was seeing so many wee ones spontaneously playing and having a great time together, including some very wee ones with the loose   s t r e e t   p a r t y   letters. 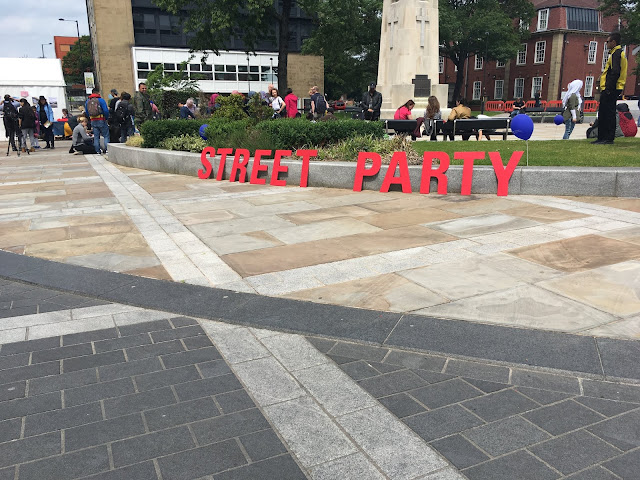 There were also the Medevac people doing the important work of keeping everybody well. 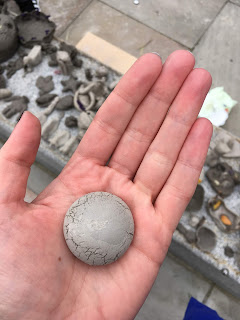 As usual, I jotted down lots of notes in my now-branded-with-a-YSI-sticker residency journal. I had intended to try to record interviews and chats, but at the time it didn't feel right. Even in quiet moments – which were rare – the engagement artists and YSI folk were so focused on the task at hand and always anticipating the next move it didn’t feel right to disrupt them and make them talk to me. They were there to give attention to children and families, many of whom have been through hell to make it to the UK, so it felt best for me to step back and observe. And the YSI team were doing so much media over the weekend I’m sure the last thing they would have needed was me bothering them unnecessarily. As might emerge in the next couple of posts, I’m becoming more comfortable with what I produce being in my voice. This is my response, and it’s fine – indeed, preferable – to move away from the air of academic objectivity I have up until now felt pressure to exude. This is my art and my time and space to make something, and that’s just fine.