On Tuesday 2 July 2019 I was at Abbey Grange Church of England Academy for a sculpture install and workshops as part of the Yorkshire Sculpture International engagement programme. Engagement artist Zara Worth has been working with Year 9 pupils (ages 13-14) to explore their relationships with social media and screen-based handheld devices in sculptural form. The result was exhibited in the school for a day in dialogue with Eduardo Paolozzi's AG5 (1958) from the Leeds Art Gallery collection. 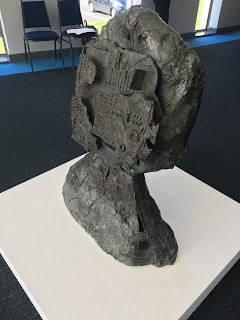 Nigel Walsh, curator of modern and contemporary art at Leeds Art Gallery, spent the day with these works and introduced Paolozzi's to various year groups throughout the day. We learned from Nigel that Paolozzi was a Scottish artist of Italian parentage whose work excelled in post-Second World War London. Nigel explained that the sculpture began as a portrait, and it does maintain a bust-like physique. The original was made by gauging into clay and plaster and sticking on bits of detritus and rubble still to be found around London in the 1950s. All of this was then cast into metal. Nigel said AG5 captures the moment of economic recovery and scientific experimentation that emerged after the difficult years during and following the war. 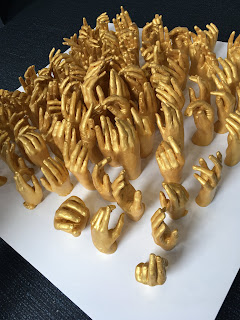 When presenting her collaboration with the Year 9s to other groups, Zara explained that they had thought about and documented the gestures many of us make with our hands when using smartphones and tablets. Zara told me that the material used to capture and make the moulds is expensive and she was really pleased with how responsible the participants were with it. The hand shapes were cast, dried and painted gold. They were arranged with the fingertips upwards, which defamiliarised them from the more horizontal positioning from which they had originated, and grouped together on a broad, low white plinth.

Zara pointed out the religious connotations of the gold and the similarities with such hand gestures throughout art history. I thought of Damien Hirst's Prayer Hands, the final piece in the Venice Treasures exhibition (and the slipperiness between having faith and unbelieving). Zara further mentioned that use of devices and social media receive much criticism for taking people out of presentness, but if we situate such acts in religious practice, people in prayer are attempting to be present in a different kind of moment and experience. With social media, she argued, it's the same principle transferred to being present in cyberspace. On the work's future, Zara said many of the pupils asked if they could take their contributions home, but she explained that it was one collaborative piece and needed to stay together, from which arose tensions between an artist in a team feeling ownership over their bit and the whole work being given over to the public as one meaningful entity. 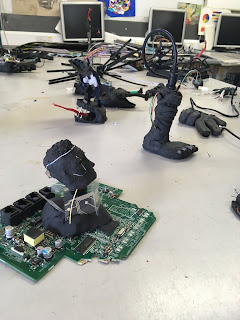 Collaborations organically arose in the maker workshops I attended during the morning. Zara took me with her to the second half of her workshop with Year 10s (ages 14-15) where they were working on themes around relics and artefacts and ideas of combining the human with technology. Using bits of broken up technological detritus joined with charcoal-coloured Playdough to represent organic compounds, the group made cyborg-esque remnants from a future history - not dissimilar to Nobuko Tsuchiyo's YSI exhibition in LAG. Gutted computer mouse casings and battery packs became hearts. Faces were made from tape reels with cable ties making hair. Bits of bodies were made of the dark Plasticine with cables and wires spraying out of them like severed veins a 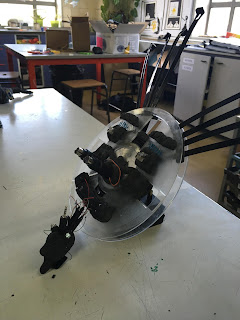 nd bones. There were four-legged animals with power leads and plugs for spiky tails. Cables were stripped revealing gorgeous coloured wires inside which were woven to make armatures on which to attach other objects. The class teacher, Paul Ginty, noted how well they'd responded to the idea of imprinting from the installed sculpture. The details upon close inspection were intricate and carefully considered.

After the late-morning break, I observed Year 8s (ages 12-13) in their workshop with Alison Smith, the engagement curator at the Henry Moore Institute.  From the vaguely humanoid shape of AG5 and its collisions with advancing technologies stemmed the remit for Year 8's outdoor workshop involving cardboard and further technological detritus. After an industrious hour in the mass of debris many wonderful creations emerged. Turn by turn, each group presented their sculptures. 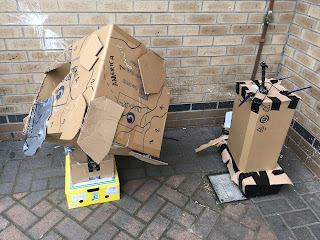 Bearing in mind that these are humans at a stage of development in which we are perhaps at our most self-conscious, what really struck me was that teenagers will act like airheads to show face in front of their mates, but what they made told a different story of intelligence and thoughtfulness. Some works exhibited ecological concern and awareness of global climate emergencies. Some considered the rise of artificial intelligence and anxieties around the prospect of it getting stronger and smarter than humans. One depicted a cuboid world breaking apart, its countries empty following a horrific war and ecological crisis. There was a wise owl that seemed organic on one side, but was ripping and breaking apart to reveal a machine on the other (Alison pointed out that the owl is a prolific symbol across Leeds). 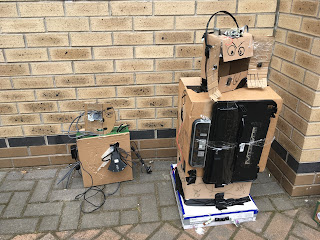 The last group's speaker explained that their mixture of a human and a robot with its heart hanging out was deliberately left unfinished because humans are never finished. This leads me back to Phyllida Barlow's list of provocations, one positing that sculpture is the most anthropological of all the art forms. Is it the most reflective of us in its performativity, its unfinishedness, its strange shapes?

These and others are questions I will attempt to address in my written piece developed from the residency experiences. I have gathered much data and many thoughts, and now it is time to plan and draft in earnest. A quick shout out to Art UK who are present throughout the engagement programme too. If you'd like to see more of my photos from these 8 residency days, I have made a public album on Facebook. Thank you so much for reading these posts. Do look out for the launch of the final written piece in September! 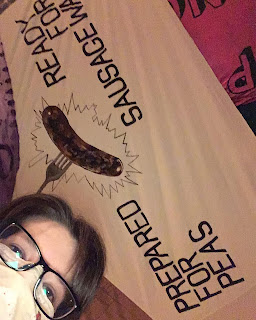